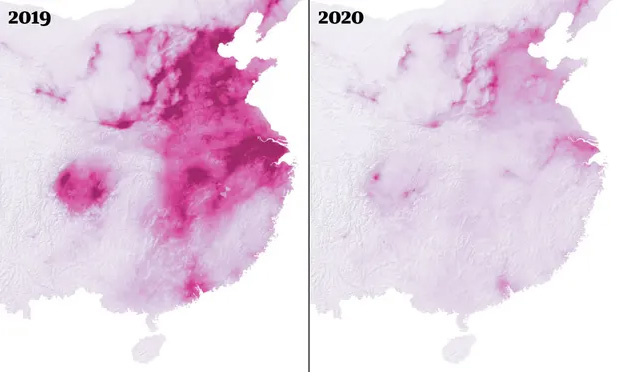 The coronavirus pandemic is shutting down industrial activity and temporarily slashing air pollution levels around the world, satellite imagery from the European Space Agency shows.

One expert said the sudden shift represented the “largest scale experiment ever” in terms of the reduction of industrial emissions.

Readings from ESA’s Sentinel-5P satellite show that over the past six weeks, levels of nitrogen dioxide (NO2) over cities and industrial clusters in Asia and Europe were markedly lower than in the same period last year.

Nitrogen dioxide is produced from car engines, power plants and other industrial processes and is thought to exacerbate respiratory illnesses such as asthma.

While not a greenhouse gas itself, the pollutant originates from the same activities and industrial sectors that are responsible for a large share of the world’s carbon emissions and that drive global heating.

Paul Monks, professor of air pollution at the University of Leicester, predicted there will be important lessons to learn. “We are now, inadvertently, conducting the largest-scale experiment ever seen,” he said. “Are we looking at what we might see in the future if we can move to a low-carbon economy? Not to denigrate the loss of life, but this might give us some hope from something terrible. To see what can be achieved.”

Monks, the former chair of the UK government’s science advisory committee on air quality, said that a reduction in air pollution could bring some health benefits, though they were unlikely to offset loss of life from the disease.

“It seems entirely probable that a reduction in air pollution will be beneficial to people in susceptible categories, for example some asthma sufferers,” he said. “It could reduce the spread of disease. A high level of air pollution exacerbates viral uptake because it inflames and lowers immunity.” Agriculture could also get a boost because pollution stunts plant growth, he added.

The World Health Organization describes NO2 as “a toxic gas which causes significant inflammation of the airways” at concentrations above 200 micrograms per cubic metre. Pollution particles may also be a vector for pathogens, as well as exacerbating existing health problems. The WHO is now investigating whether airborne pollution particles may be a vector that spreads Covid-19 and makes it more virulent.

One of the largest drops in pollution levels could be seen over the city of Wuhan, in central China, which was put under a strict lockdown in late January. The city of 11 million people serves as a major transportation hub and is home to hundreds of factories supplying car parts and other hardware to global supply chains. According to Nasa, nitrogen dioxide levels across eastern and central China have been 10-30% lower than normal. 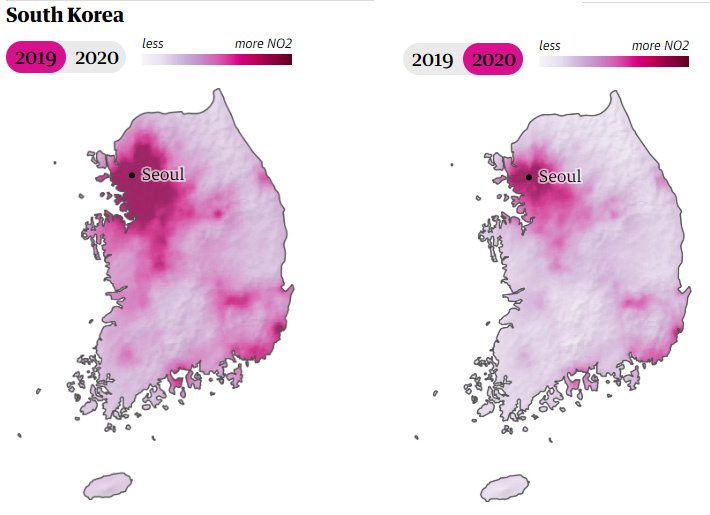 NO2 levels also dropped in South Korea, which has long struggled with high emissions from its large fleet of coal-fired power plants but also from nearby industrial facilities in China.

The country has avoided putting entire regions under lockdown but is meticulously tracing and isolating suspected coronavirus cases. 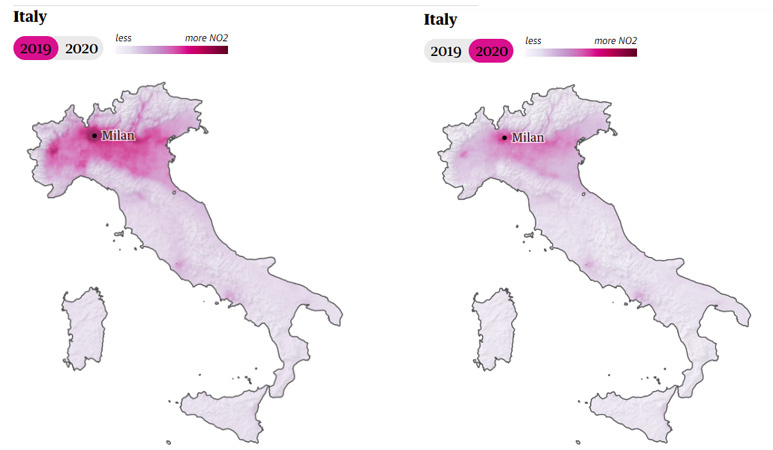 The changes over northern Italy are particularly striking because smoke from a dense cluster of factories tends to get trapped against the Alps at the end of the Po Valley, making this one of western Europe’s pollution hotspots.

Since the country went into lockdown on 9 March, NO2 levels in Milan and other parts of northern Italy have fallen by about 40%. “It’s quite unprecedented,” said Vincent-Henri Peuch, director of the Copernicus Atmosphere Service. “In the past, we have seen big variations for a day or so because of weather. But no signal on emissions that has lasted so long.”

The source is not yet clear. One possibility is a slowdown of activity in Italy’s industrial heartland. Another factor is likely to be a reduction in road traffic, which accounts for the biggest share of nitrogen dioxide emissions in Europe.


Peuch said satellites were now starting to pick up similar signals in other European cities that are entering into lockdowns, though the data needs to studied over over a longer period to confirm this is a pattern. 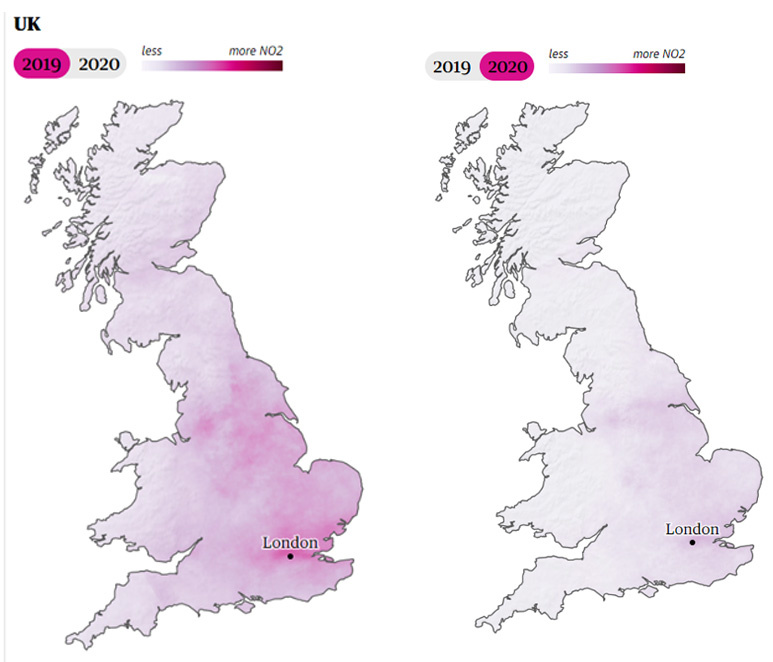 Although the UK is more than a week behind Italy in terms of the spread of the disease and the government’s response, roadside monitors already show significantly reduced levels of pollution at hotspots such as Marylebone in London.

Road traffic accounts for about 80% of nitrogen oxide emissions in the UK, according to Monk. For the average diesel car, each kilometre not driven avoids 52 milligrammes of the pollutant entering the air.

“What I think will come out of this is a realisation - because we are forced to - that there is considerable potential to change working practices and lifestyles. This challenges us in the future to think, do we really need to drive our car there or burn fuel for that,” said Monk.